It’s a very long story but it starts with our oldest, Jonty who, after we first moved to Courchevel 15 years ago used to always gaze at the Olympic Ski Jumps in Le Praz every morning on the way to creche! Of course, growing up in Courchevel meant that both our boys would be skiing almost before they could walk and they both desperately wanted to be in the Club des Sports and to wear the coolest ski jackets in town! Once in the club aged 5, Jonty simply got faster and faster and delighted in telling me one day after picking him up from Ski Club that he had been ski jumping!

We as parents had been informed that the kids would be doing a handful of seances of cross country skiing and some ski jumping and had lead ourselves to believe that may mean building the odd jump on the slopes, as most kids do. So when he announced this (as we happened to be driving past the Ski Jumps!), I asked casually where abouts. He answered “The Stade”.  Stade is a word that encompasses a number of things but pretty much translates as “place where you compete” and I must admit I thought he meant the Stade de Slalom in Courchevel 1850 where the kids often train and compete in Giant Slalom or Slalom. When he said “no, the Stade du Praz” (as we passed by) I almost crashed the car!  At the time the smallest jump at the Olympic Stade was a 60metre jump!  After my heart calmed down and I had stopped the car I asked him to confirm what he had said and you could see by the glint in his eyes he realised that this was quite a big thing for a Daddy! Frankly I was more concerned about what his Mummy was going to say! I told him that he must wait for Mummy to sit down before telling her his news!!  The glint in his eyes doubled

That was just the start and now we have two boys who live, breath, “game” ski jumping.  Jonty won his first competition at the same age (6yr) and when he was not jumping or training to jump, more often than not he was playing ski jumping games on the PC or I pad!  We would go shopping or be visiting London and look round and would see “position” being practiced in the middle of the isle or on the tube.  (“Position” is the position one adopts sliding down the in run before taking off from the “table”.) Some 8 years later Jonty’s record is now 132m!!

Louis, his younger brother of 5 years of course, saw only one route! Seeing his older brother Jump every weekend competing across France and into Europe one would have thought may have put him off!  Not a bit of it! When Louis went for the interview as part of the entrance test to the Club des Sports he was asked “why do you want to join the club des sports?”  The head trainer Sebastien was expecting something like ” to ski really well” or “to be a ski champion” but was a touch surprised when Louis said straight out without a second thought “To beat my brother!”

So now Louis has just recently passed the 60metre mark aged 9 and is planning to get to compete with his brother this autumn in the French Championships if he can qualify for the U17 competition on the 90metre “normal hill” (whoever thought it was normal was having a joke!)

You may be thinking “Well I guess this only happens for a few months in the winter”.  If you were, you would be wrong! As soon the snow melts, using a plastic matting surface that resembles green spaghetti which is sprinkled with water they start again in May!  The summer jumping season lasts until mid-October!!  We get to October, have a very quick break and it starts again in November!!!  So, I thought if you can’t beat them… so found myself on a regional training course to be a Ski Judge!  Style and technique was always my thing and before long I had qualified as the only British National Ski Jump Judge (or in fact, I’m a French qualified National Ski Jump judge, if that makes sense!?!). Then, without really realising it, I was voted as President of Envol the local charity for supporting young local ski jumpers!  I had only turned up at the meeting as they were offering a glass of local wine!

I won’t go into the gory details of how the “Jump with Eddie” thing came to be. That story, as they say, is for another blog!

What I will say is although we do spend a considerable time as a family focused on this crazy sport we have met some amazing people, seen some pretty amazing sights and have two boys that spend most of their lives outside flying through the air and that’s not all bad 🙂

Welcome to the Alp Leisure blog! So, when is a blog not a blog?
Previous Article 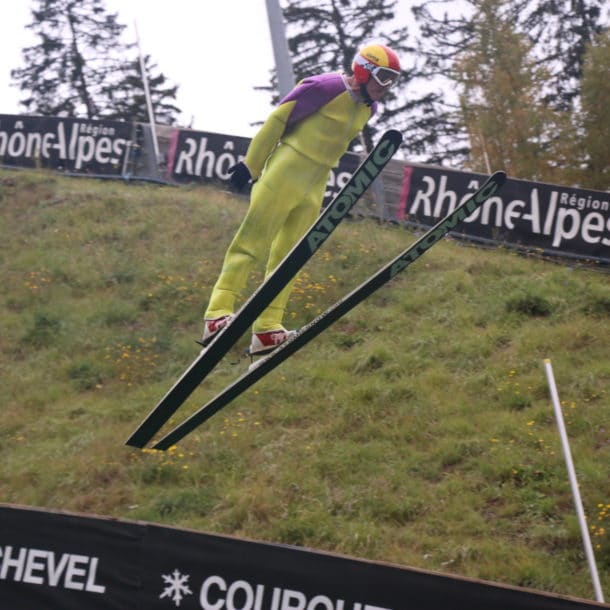 Eddie the Eagle has landed in Courchevel!
Next Article
© Copyright Alp Leisure Ltd