Eddie the Eagle has landed in Courchevel!

So our competition with Eddie Edwards (aka the Eagle), Ski 4 Cancer, Courchevel and the Club des Sports Courchevel has now moved a stage closer to lift off and as a culmination of the first week of training our contestants will be present and hopefully involved in the National French Summer Championships on the 17th & 18th of October. Now as you can imagine, Eddie is a competitive chap and is very keen to take on the French and be involved in the Senior Competition on the 90m hill so we have arranged for Eddie to come out and do a little extra training this week to give him a good chance to get to the level required.

Jonty Learoyd on the 90m at Courchevel

Considering Eddie hasn’t really jumped properly for almost 20 years this is quite an undertaking but once you meet Eddie you realise that any challenge is just part of his normal way of life.  He did do some jumps for “The Jump” last year but jumping on a 25m is quite different to a 90m!  Further he tells me that when he last jumped the ski bindings were only attached at the front (these days they have an “attache” which mean the heel lifts but with some sort of limit/control). So getting used to a different Ski/Binding sytem as well as trying to fly 60m just adds another level to the challenge.

So Eddie has simply got on with it, slowly building up from doing some “reception” runs, to getting on the lowest bar on the 60m and getting back in the groove.  He has been jumping with the regional team of the Comite de Savoie, who our Jonty is a part of, spending some time with Damien Maitres the Comitee coach and Damien Minder of Meribel who has also been helping too. It’s great to see that sport and in this case Ski Jumping brings people together with both coaches happily giving their time and enthusiasm for a fellow Jumper! Later this week Tony Delaup and Fabrice Vischi will also be helping and Eddie is getting to know the local team and slotting into the routine nicely.

As you can imagine Eddie was somewhat apprehensive on his first jump but it is amazing to see how quickly he has got back into his stride and within a few jumps he was going from a higher bar to increase his “in-run” speed.  I can only guess it’s a bit like riding a bicycle! Very soon Eddie and the coaches were then discussing technique and looking to improve and gain confidence.  Modern ski jumping uses the aerodynamic V flight position that became popular close to the end of Eddie career back in the late 80’s early 90’s but Eddie understandably started off with the classic style he is comfortable with, although as you can see from the pic, has already started to take on board and try to adopt the newer style the two Damiens were suggesting.

Eddie taking off from the 60m

So it’s frankly both a pleasure and inspiring to see someone who loves his sport with a passion and is in his element back on the hill.  Truly the Eagle has landed and on the basis of day one, he has every chance of giving the locals a good show!

PS If you are cutting your toenails when the competition is on and can’t quite make it, don’t forget you can still help Ski 4 Cancer by donating here http://www.ski4cancer.org/eddie-the-eagle-training-camp-october 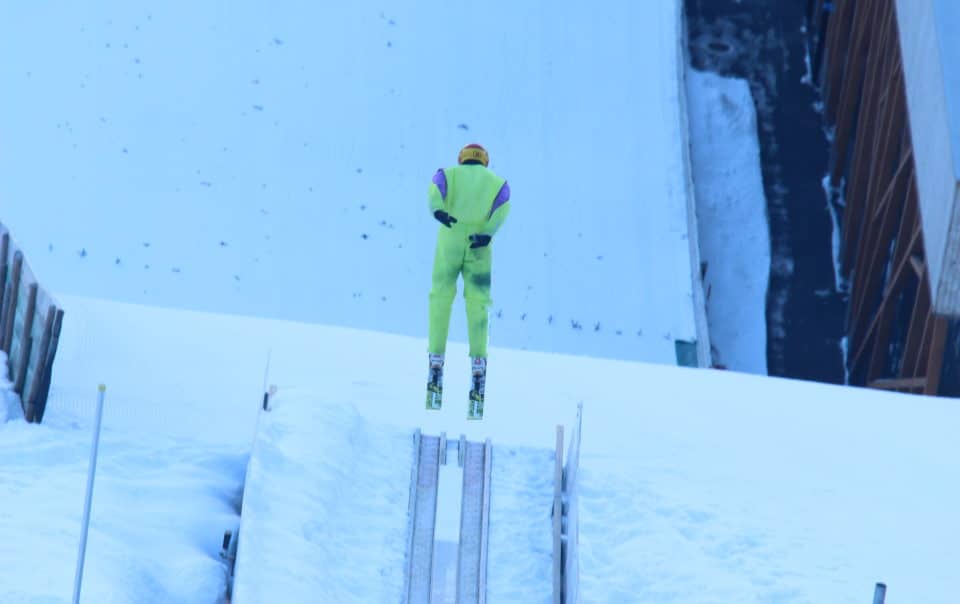 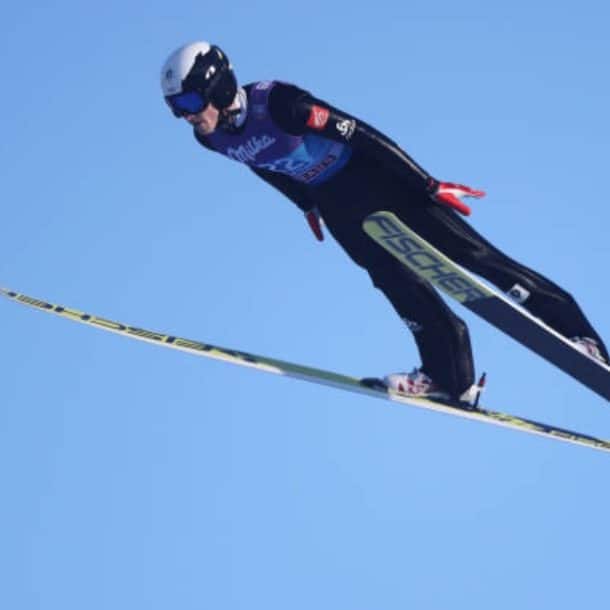 Ski Jumping? Why & How?
Previous Article 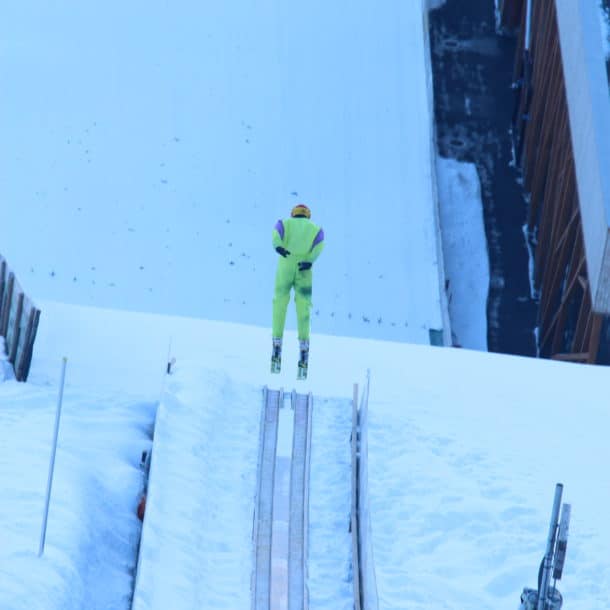